A dramatized account of a great Russian naval mutiny and a resulting street demonstration which brought on a police massacre.-imdb.com

Battleship Potemkin is a technical masterpiece as it was an experiment in “montage” and its editing techniques remain influential to this day. As a propaganda film it exceeds expectations, presenting a story that’s deeply emotional even for a foreign audience. There is no question that Battleship Potemkin should be seen by every film student, but is it as mandatory for a more casual viewer?

Let’s face it; Battleship Potemkin is a propaganda film. It portrays the government as rats and does nothing to redeem them. However, this is no worse then the way The Empire is portrayed in Star Wars or Loki in The Avengers. There are no real characters to attach to, because this movie isn’t about characters. It’s about a general population and their struggle to have rights and that story is done incredibly well, both for a 1925 film and even for a film today. The story evolves and evolves taking you places you wouldn’t expect, and this makes the film actually a unique watch. For how old this movie is, its story isn’t that cliché and it’s really quite refreshing.

The solid story wouldn’t be nearly as strong if Sergei Eisenstein hadn’t been able to encapsulate the emotion like he did through editing and cinematography. The staircase scene, the fight on the battleship, and the ending scene are all monumentally tense and effective. The staircase sequence alone is shocking enough, especially if you go in with 1920s expectations. Going from a more basic movie like a Chaplin or Keaton work to this will make the film all the more effective. While those movies work just fine, Battleship Potemkin exceeds all expectations and destroys all comfort you may have. The violence used and the shocking portrayal of humanity being destroyed is something that wouldn’t be done today, let alone back then.

Where this film does fail is the uneven pacing. There are plenty of points in-between the more dramatic scenes where the movie just hits a brick wall. People are just standing around talking, or they’re just doing… stuff. Getting ready for war or protesting bad meat, all at a slow pace and with nothing particularly interesting to look at. The soundtrack helps a little as it’s generally very dramatic and nice to listen to, but that doesn’t completely rid you of the creeping sense of… boredom.

If you can make it through the movie, and odds are you will, there will be no doubt that what you watched was totally worth every moment and that you won’t forget it any time soon. Battleship Potemkin is a masterpiece of a movie. Not without the typical pacing problems of the time, it’s still a great watch and in my opinion something that even a more casual viewer can enjoy. 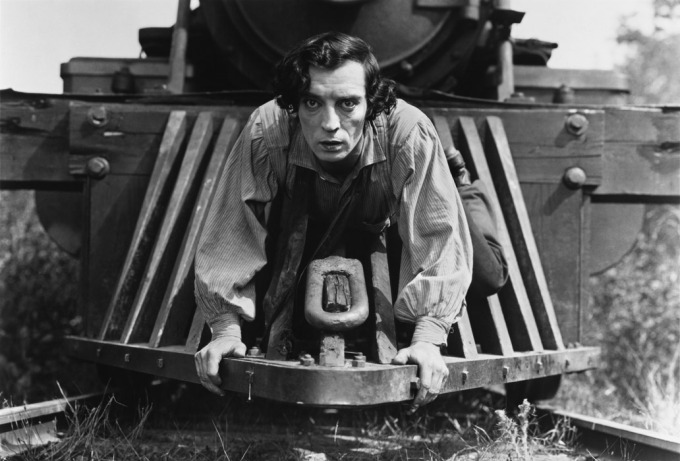 When Union spies steal an engineer’s beloved locomotive, he pursues it single handedly and straight through enemy lines.-imdb.com

Out of all the silent era comedians, Buster Keaton is notable for his lavishly large set pieces and there is perhaps no better example of this then 1926’s The General. With the restrictions of silent era technology, most humor of the time was slapstick, because only a visual was required. Most of the time slapstick is relatively simplistic in its presentation and sophistication; however that doesn’t mean you can’t put a good plot around it and that’s exactly what Keaton did. The General is fairly simplistic. Obviously. The acting, production, etc… isn’t the best. Obviously. But! Keaton does his finest to stretch the limitations of the time to their max.

Keaton’s protagonist is a breath of fresh air from the Chaplin copies that perforated this era; he’s kind, brave, but still clumsy. Keaton’s mugging to the camera may be generic by the times standards, but on occasion his reactions to all the crazy shit going on around him is priceless.

The movie progresses through a civil war landscape (on the southern side nonetheless) with the danger of war always present. This plays back into the plot, but what it really achieves is a sense of tension. The people around Keaton are willing to kill him and this leads to genuine moments where you wonder how he’s going to pull this off and stay alive. The only problem is that when Keaton isn’t on screen, this war backdrop proves immensely boring, but if you’re willing to wait just a little bit longer Keaton will pop back up just in time to provide a few smirks.

This movie is most likely not going to get you to laugh out loud, but chuckles and smirks will abound. The choreography of many of the slapstick scenes is truly astonishing, because they are so sophisticated compared to the rest of the movie. Mock silent film all you want, they had slapstick down to a fucking science. The first act is set piece after set piece and this really is astonishing, not only does it convince you of the Keaton’s comedic genius, but also his general filmmaking genius, since it truly feels like a train chase. Now to be fair this could also be the work of his co-director Clyde Bruckman, but alas we’ll never know.

The General is not your average slapstick movie. This one is big. It’s grand not only in price but scale. The ending train scene is a great example of this, as well as the other primitive effects. This movie was a remarkable achievement at the time and still stands as a classic to this day. If you want to dip your toes into silent film, this is a great way to start and if you’re a silent film fan, then you should have seen this by now.