I’m sick of making decisions.
Every goddamn day I have to make goddamn decisions because nobody else fucking will! I made and make decisions for myself, for my family, in my old relationship, for my coworkers, and especially for my friends. And I’m fucking sick of it.

The only reason I keep making decisions for everyone else is because I’m too impatient. Too unwilling to waste what little time we have on this planet humming and hawwing about what bloody pizza to get! And I’m just agressive and confident enough to make them because if you don’t fucking like it then you should have said something!

I get why people don’t like making decisions because I feel the same way myself. With every decision you make comes responsibility. Responsibility for the consequences and the effects on people. So it’s nice to take a break, turn off your brain and let other steer the ship. Every time I make a decision I risk ruining the day for everyone else, but I’ll take it head on not because I want to, but because nobody else will. And while I understand that mentality that doesn’t mean it doesn’t piss me off EVERY GODDAMN DAY!!!

I take responsibility for every aspect of my life every day! What do you do!? Sit on your ass all day playing video games, smoking pot, or browsing the web!? FUCK YOU! If you can’t manage to take some fucking responsibility for your actual life then I’d think you’d be at least able to manage picking what you fucking want on your pizza or what to put in the script, but NOOOOOOOOOOOOOOOOO!

Think through your actions, think through the consequences and fucking gain the goddamn strength to stand up more than once a fucking month! At least do it so I can finally get some goddamn rest.

A lesson I need to re-teach myself every once in a while is this:
There’s no real point in feeling lonely all the time. There’s no need to want another so badly that you spend nights crying or being moody. All that does is make you feel worse than you should have to.
After all you’ll meet that person someday. I’m not being optimistic or a romantic, I’m just being realistic. Statistically you’ll meet someone some day.
So why waste your time wallowing in misery? All you need is patience and you shall be rewarded!
That being said, loneliness does provide one service: contrast.
Without hunger, food can’t be truly appreciated. Without cold, warmth can’t be truly appreciated. Without loneliness, Love can’t be truly appreciated.
So don’t feel bad for being lonely, as all your doing is making that love of yours even better when it does come. Find a balance though, or you might get so wrapped up in loneliness you won’t be able to appreciate anything, let alone love.

Thanks to a certain show for re-teaching me that. 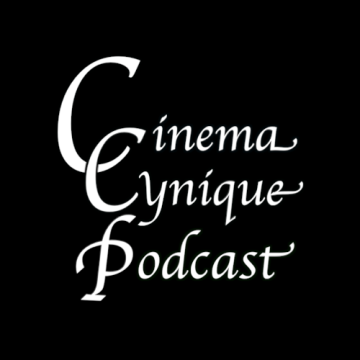 I can’t believe I forgot to promote this!
I’ve got a new podcast: La Cinema Cynique Podcast, where my co-host and I review movies!
Check out our episode on Scott Pilgrim vs the World here!
And our recent episode on Saw here! 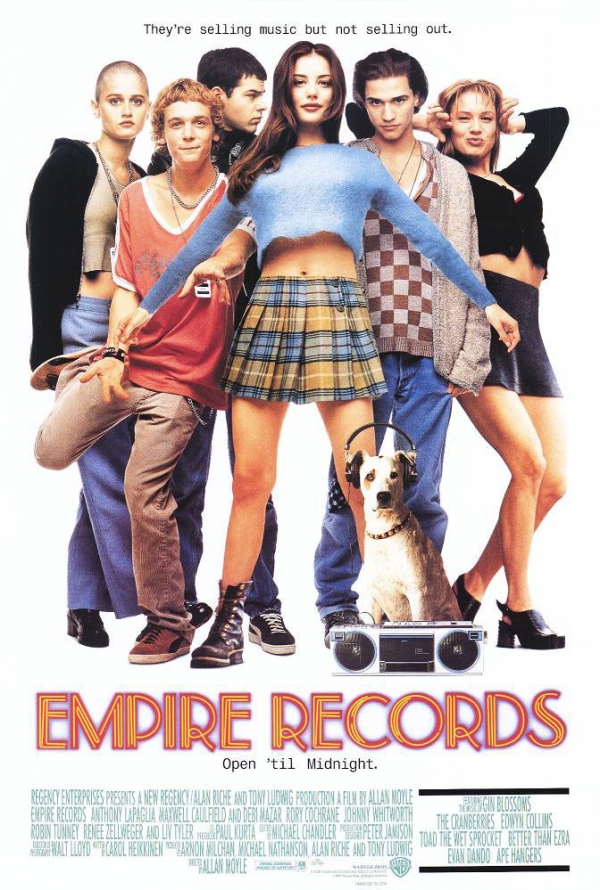 Lucas: The wannabe philosopher who steals $9,000 from his boss and then loses it in Atlantic City while attempting to save the store. A.J.: The artist who’s struggling with his feelings for Corey. Corey: The straight A student who plans to lose her virginity to the visiting super star Rex Manning. Gina: Corey’s more bold and sarcastic best friend. Debra: The punk rocker with a bandage on her arm and a new haircut. Mark: The weird one. Eddie: The pizza guy. Berko: The guitarist. Joe: The boss. This cast of misfits make up the employees of Empire Records, a small vinyl shop that is in danger of being bought out by The Man. Empire Records tells the story of one day in these characters’ lives; one day filled with laughs, drama, and some kick ass music.

The first two thirds of Empire Records is akin to Clerks, in that it is an aimless character study and string of fairly unrelated events. It bounces from character to character, dealing with their subplots, occasionally intertwining them or addressing the main plot of the failing store. The characters are all fairly diverse and unique, represented by not only the sharp-witted and snappy writing, but also the soundtrack choices. The scenes of drama are frequently interrupted by various musical inserts since, obviously, this is a record store. The soundtrack really is fantastic, even to a musical neophyte such as myself, playing everything from AC/DC to a score of indy bands I’ve never heard of.

While the characters aren’t nearly as cliche as the cast of, say, a sitcom or a slasher film, they do fit into certain stereotypes. However, this leaning on cliche doesn’t feel like laziness, which it usually is, but rather a legitimate use of the tropes in order to diversify its rather large cast. Despite its diversity, the large cast can still be a touch distracting –especially in the first half when characters are almost piled on in their introductions– and the movie can feel a little crowded at times. It is a fun crowd to spend time with, though: the cast being nicely split between likeable and loveably hateable.

Unfortunately the third act is where Empire Records starts to fall apart, as the various plot threads meet a cliche ending and the film starts to take on a cheesier feel-good vibe. However, I would make the case that the cheese adds to the the film’s attitude of “Fuck it, we’re young and we’re gonna have fun!”

Empire Records was panned on release for being cliche and predictable, rightfully so, but looking at it in a modern context it seems remarkably more unique. I’ve seen very few films like it, and I’d wager the rest of my generation hasn’t either. In fact there is a surprising lack of teen dramedies out there for millennials, or at least good ones. Thanks to the rise of PG-13, most films that are aimed at us are also aimed at everybody, so we don’t get many films that are truly made for and about teenagers and college kids. Sure, there’s a raunchy comedy here or a spoof film there, but nothing quite like the teen films that came before in both quantity and quality. The 80s were like a golden age in retrospect, with the entire Rat Pack canon of films. The 90s had less, but still its fair share between Empire Records, Clueless, 10 Things I Hate About You, etc… The only popular teen comedy that actually touched on the issues our generation faces/faced was The Perks of Being a Wallflower. So, while Empire Records may have been cliche at the time, I think there’s an audience out there nowadays that could enjoy it, since it’s still a well done film that tackles the universal issues of coming to age.

What are your thoughts on Empire Records and the state of teen films? Sound off in the comments below! Be sure to visit the Geek Juice Media, Buck on Stuff, and Hidden Horrors for more great reviews!

When it comes to japanese animation, anthology films are a great way for new directors to get their start, as they’re rarely handed a TV series or feature film. The format of short film allows them to express their creative style, but without the budget of a larger project. There was a healthy dose of anthology films in the late 80s/early 90s between Neo-Tokyo, Memories, and Robot Carnival. While I can wholeheartedly recommend Memories and Robot Carnival, I’m not sure Neo-Tokyo (aka Manie-Manie, Labyrinth Tales) earns the same privilege. The segments aren’t particularly outstanding or entertaining, nor are they awful. They’re no doubt interesting experiments in storytelling and animation, but unfortunately all that results of these experiments is mediocrity.

The first segment, “Labyrinth,” acts as the framing device, telling the story of a young girl who, during a game of hide and seek with her cat, discovers a labyrinthian world. In this world are shadow figures, cardboard residents, and a mysterious carnival clown who shows her the other two segments. Directed by Rintaro (Space Pirate Captain Harlock, Metropolis), the segment is extremely interesting to look at due to its clever camerawork and unusual character design, but has little to offer besides that, having no dialogue, character, or real story to it. It almost breaches into surrealism with the strange images and complete lack of character or narrative, but that would actually make it interesting if it did.

The second segment, “The Running Man,” is perhaps the best segment of the three thanks to its intriguing concept and gorgeous animation. “The Running Man” follows a reporter as he writes a story on Zack Hugh, a racer in the dangerous Death Circus circuit. In an interview with him, the reporter discovers that Hugh is telekinetic, which is how he’s been defeating the other racers. Unfortunately, after years of racing, his body is shutting down on him and the reporter bears witness to his final destructive race that Hugh wins even after he has died. The explosions and gore of “The Running Man” are fascinating to watch due to the extraordinary detail, the trademark of the director, Yoshiaki Kawajiri, who’s also responsible for such extremely violent works as Ninja Scroll, Wicked City, and Vampire Hunter D: Bloodlust.

“Construction Cancellation Order,” the third segment, was directed by Katsuhiro Otomo (Akira, Steamboy) and plays on his favorite theme of man vs technology. Sent to a fully automated construction site to shut it down after the last foreman disappeared, Tsutomu Sugioka finds himself held hostage by the robot responsible for controlling the crew and keeping them on schedule. The segment, while lacking in a solid ending, manages to be entertaining if solely through the tonal shift that occurs halfway through, taking the short from weird and light-hearted to creepy and mildly horrifying.

Neo-Tokyo as a location is a futuristic rebuilt Tokyo, and is the center of many cyberpunk stories. However, Neo-Tokyo as a film lacks in a lot of the familiar imagery and themes we’d see in other cyberpunk works. While Neo-Tokyo is by no means bad, it fails to capture our imagination through its individual segments or present us with an overarching theme or question. It has no utter insanity like in Robot Carnival, nor does it have one shining segment that could be a film on its own, as with “Magnetic Rose” in Memories. One’s time is far better spent on those other films, but if you so wish to check it out I’m afraid you’ll have to resort to not-so-legal sources as the DVD is out of print.


What are your thoughts on Neo-Tokyo and what are favorite anime anthologies? Sound off in the comments below!
This review and others like it can be found over at the ever amazing Geek Juice Media, for more movie and TV talk head on over to Buck On Stuff, and for more horror go to Hidden Horrors!
Loading Comments...