For as large of a presence as Dracula has in pop culture, his movie count is actually quite low at least when you consider the ones that have actually breached the mainstream. There’s the Universal Dracula series, the Hammer Dracula series, Francis Ford Coppala’s Dracula and Dracula 2000. If we exclude Coppola’s Dracula and Dracula 2000 as being fairly irrelevant these days, then we’re left with the original Dracula series and Hammer’s Dracula. While you hear tons about Universal monster movies from filmmakers who cite them as their inspirations and people who have used them as the standard for the past 80 years, you don’t often hear about the Hammer films anymore. They still have some presence, with their ideas folded into the mind of pop culture like something out of Inception, but no one really talks about the films themselves. It’s a shame too, since Horror of Dracula (the first of the Hammer Dracula films) is one of the best not only Dracula, but vampire films I’ve ever seen.

Since Hammer had to keep their film different enough from Universals to not get sued, the original Bram Stoker story is not followed in this incarnation. Jonathan Harker travels to the castle of Count Dracula (Christopher Lee) to start his tenure as the new librarian, or at least thats his cover as he’s actually there to put an end to Dracula’s reign of terror. He unfortunately doesn’t succeed, and it’s up to Doctor Van Helsing (Peter Cushing) to finish the job.

There’s something about the tone and mood of Hammer films that I thoroughly enjoy. The gothic sets, the indeterminate time period, the excellent cast of recurring actors, the grandeur over grindhouse. All of it mixes together to create a dark a moody universe ripe for the type of horror America was severely lacking at the time. Thats why my spirits immediately lifted when I saw that The Woman in Black was a Hammer film, because I knew they could create the tone necessary for that kind of throwback ghost story.

While the other Dracula movies steadily declined in quality as they started pumping them out, this one had a certain freshness to it. It’s clear that the script, acting, directing, mise en scene all had tons of effort and heart poured into them. The pacing of the film works well, the story has the right twists and turns and overall it’s an engrossing film to watch. It’s a kind of movie and story we just don’t get these days. It’s slow, meticulous, atmospheric instead of fast, bombastic and gory. Thats not to say that there’s no gore in this film, there’s a little, but the very small quantity of it makes what is there extremely potent. We feel the weight the small amount of blood on screen would hold in real life because we’re not being sprayed with it like a Raimi film (not that that’s a bad thing in his films). There’s also something to be said for the colour of the blood in Horror, as it’s an odd vibrant red somehow created by technicolor process of the day. It’s a treat to look at for horror hounds like myself.

Something I noticed while watching Horror of Dracula was that it was fairly intelligent, and treated the audience the same way. It wasn’t heavy-handed in any way, be it with plot points, acting, or exposition. It cut away from scenes, leaving you to fill in the blanks, which wasn’t hard to do or particularly left up to interpretation. What happened was set up, but not necessarily delivered. This meant more time for the film to develop and allowed the horrors of the movie to play out in your mind, a la Hitchcock, which tends to be a far more effective weapon when used properly. This subtle difference in treatment is something that is sorely lacking in a lot of films today. Wether intentionally or not, there seems to be a more obvious manner in which stories are presented. Maybe this film is just a special occasion, but it seems to me that this could be a source of conflict for any audience not trained to think during a film. That’s why blockbusters don’t give two shits about story and subtlety is something entirely lacking from most mainstream comedies. Anyways, something to ponder when watching this or any other older film.

Horror of Dracula is not for everyone, especially those who fall into the category discussed above. However, those who are tolerable or even fans of a slow-burn film are certainly going to be in the right mind set to enjoy this film. I highly recommend this movie to anyone looking for something different, be it in horror or film in general. It’s so different from modern horror, yet isn’t a black and white or even silent production. You can still relate to it since it’s in colour, and it’s timeless/period setting will make it more acceptable to the mind. Horror of Dracula is not necessarily underrated, but just under-watched in this modern era where vampires only have distant relation to the once powerful image that Dracula once imposed. Horror of Dracula is available on Amazon Instant, itunes and DVD. 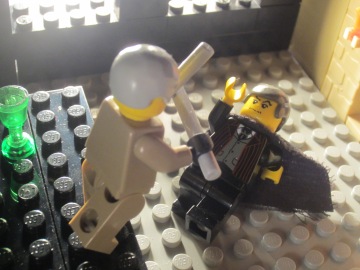