The Artist is an Oscar winning 2011 film that is unlike any film you’ve seen before. It won Best Picture, so of course it’s a good movie, but the thing you never get in any award ceremony is why should it win? What about this film makes it not only better then all the other nominees, but better then every other film that came out that year? Well, while you should just go watch it and find out yourself, I’ll try to explain to you some of the aspects of this film that make it great.

First, a synopsis. The year is 1927, and George Valentin is a silent film actor who is incredibly popular. He stumbles across a young new actress named Peppy Miller and gives her advice that sets her career in motion. The two have a spark of romance between them, but George is married so it goes nowhere. We then flash to 1929 and George’s producer shows him the newest technology, sound movies. George laughs it off, thinking that it’ll never last, but is soon forced to face it as the studio switches completely to sound movies. He confronts his producer, and he says that that’s what the public wants to see and unfortunately with new sound movies, audiences also want to see new faces, including Peppy Miller. George, certain that silent films will still prevail, stubbornly declares that he will make his own film. He does, and just as the film is about to be released, the stock market crashes. The film needs to be a success or George will be broke, unfortunately the audience has moved on, shown by the wild success of Peppy’s new sound movie. The final blow is delivered when his wife tells him she’s getting a divorce. We then flash forward to 1931. George is completely broke, a forgotten idol, and Peppy is a major success. George sends away his chauffeur, his only friend, to get a new job since he can’t pay him and finishes auctioning off his stuff for a small amount of cash. Drunk and depressed, he sets his films on fire. His dog retrieves a policeman who pulls him out of the building, clutching one last film canister in his hands. Peppy discovers George is in the hospital and rushes to him, discovering that the film he saved was her first one, the one they starred together in. She brings him into her house to recover and then convinces her producer to let her and him star in a new film. George discovers to his despair that she is the one that bought all of his stuff and returns to his apartment to kill himself. Peppy rushes to him, arriving just in time. She tells him of the film and with new hope, George returns to the screen as a dancer. 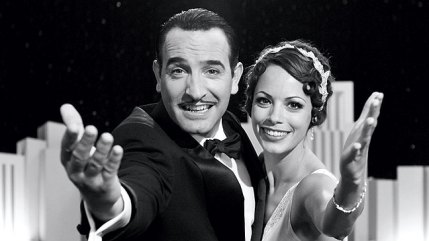 The film has a very basic three act structure: 1927, 1929, 1931. The first act introduces us to the characters, showing George to be a proud, but loveable guy and Peppy as a bombastic, but caring up-and-comer. George’s strained relationship with his wife helps the audience feel less guilty when he shares a tender moment with Peppy. However, George never goes too far and that helps their relationship feel more real and human, allowing it to be built upon later in the film. In 1929, we see Peppy is a more successful actress and it’s done with a very clever montage playing up the title cards common to films of that era. George’s stubbornness, while unpleasant, is unique in that we root for him. Even though he’s blatantly refusing to accept sound because it would hurt his pride, we still desperately want his film to succeed. The scene where George finds out about the crash is powerful, mainly because it reminds us of reality and it raises the stakes on the success of this film. The betrayal of Peppy as she talks to reporters about the old-fashioned ways of silent filmmakers is soon forgiven as we see the emotion on the actress’s face when she visits George to apologize. The parallel between George and Peppy is very apparent in the second act. George’s career is careening down and Peppy’s is shooting upwards. The career strains on George come into play with his marriage, even though the wife’s a character we’ve almost forgotten about. The wife is a perfect example of how there are no characters we hate in this movie. There is no villain  just the natural progression of the industry. The wife, while she hurts George and could have easily been demonized by the filmmakers to help the audience feel more comfortable with George and Peppy, is also made human. There’s a short scene where George sits alone with his dog, contemplating his failed career and cursing the world in his head. His wife comes in and begs him to talk to her, but he sits there silently. We see that she isn’t totally to blame for this failed marriage and the fact that this has been going on for two years is all the more heart-breaking. In the third act, George is completely broken. Every last remnant of his career he is forced to sell and see degraded. He is discarded by the world and he knows it. Clifton, the chauffeur  is his only friend and was up to this point just a background character. He steps up, desperately trying to help George but he keeps pushing him away. George, drunk, returns to his apartment and watches some of his old movies. The film reel runs out and all that’s left is George’s shadow. George yells and curses at it, and it walks off the screen. It’s a very potent reminder that George did this to himself and in his anger and rage he sets his films on fire. Very quickly he realizes what he’s done and he clutches the last canister with a death grip. When George is recovering in Peppy’s house, there’s a potent scene where he finds his stuff in a dark room in her house, covered in sheets. His last remaining possessions, which he thought went to people who still appreciated his work instead ended up purchased by one woman and hid away in a dark room. This sends him over the edge and as he’s preparing to kill himself, you as an audience member are practically screaming at him not to. He sits alone in a burnt room, his dog is sitting there desperately barking at him, but we can see on his face that it’s not reaching him. It’s an incredibly powerful scene that has a great climax.

Let’s talk about sound. Sound is something we take for granted not only in our lives, but in our movies. Film is one half sound and one half images. Obviously sound is an important part of The Artist’s plot and also it’s making. To see a silent film these days is rare and those who watch them are pretty much film buffs. This film knows this and throws you into it right away. The opening scene shows the screening of a typical 20’s action movie, with grand music and hammy acting, in order to warm the audience up. Then it throws us in, with the grand applause at the end of the film being completely absent. We see it on the actor’s faces, we know its happening. There’s no music, only silence and from then on we know we’re going to have to learn to like this format quickly. The silence isn’t really a problem most of the time, with the more engaging scenes making you forget you’re watching a silent film. However there is sound in this film and when it’s used, it’s done spectacularly. About halfway through the second act, George is in his dressing room after laughing off the sound film screen test. He’s uncertain about this technology and is worried, but he still goes about his business. He drops something and we don’t even notice it makes a sound. We’re used to to hearing sound it’s just natural to us. But he notices, in a almost fourth wall breaking revelation, and drops it again. Soon everything is making noise; everything we’re used to hearing except it’s louder. But George still can’t be heard. He screams and runs outside, trying to be heard, but the only thing he finds is a group of girls laughing at him. That’s when he wakes up. This powerful sequence not only shakes up George, but also the audience. We now have the same uncomfortable relationship with sound that George has. Almost in response to the lack of sound, the music is amazing. It perfectly encapsulates the emotion of the scenes, something even actual silent film scores sometimes couldn’t achieve.

Overall, the film is downright amazing. The film screams 1920s in it’s lighting, blocking, and cinematography. But at times you can feel the modernism of its making and that gives it a sense of realism that we can identify with. The entire film is a continuous string of powerful emotion and acting, with great comedy mixed in to counterbalance the tragedy. However, like the peaks of a mountain range, the film outdoes itself at times, with a few outstanding moments that leave you with your jaw on the floor. I didn’t spoil all of those moments, because I really do think everyone should see this movie. It’s a great watch and it’s a great way to gain appreciation of how films were made for 20 years. Film buffs will like the filmmaking, and general audiences will like the comedy and romance. It’s on Netflix, so go check it out.