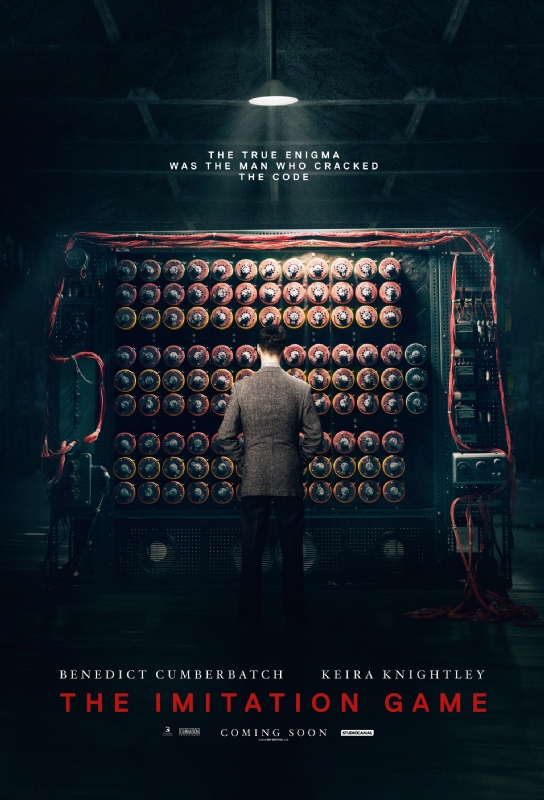 With four of the 2014 Best Picture nominees featuring the struggles of historical figures and two specifically being the struggles of geniuses, it makes sense that Benedict Cumberbatch would star in one of said films. Cumberbatch has moved safely within his comfort zone from Sherlock Holmes to the character of Alan Turing, dubbed the “Father of Computer Science.” While Turing led a very interesting life, The Imitation Game focuses on his work cracking the infamous German Enigma code of World War II, by creating a computer to sift through the millions of possible solutions to its cypher.

In 1951 a police officer is curiously investigating a break-in at Alan Turing’s residence, only to find that all information about the man is classified. In 1939 Turing is hired to be a part of the top secret program to crack the German code, making enemies out of his bosses and colleagues immediately. Slowly he gains support and enlists several mathematical geniuses to help him, including sole female member Joan Clarke, played by Kiera Knightly. The film’s drama operates mostly on people’s lack of faith in Turing, with several scenes of him stammering out a confused defence to either his military overseers or his partners. It seems astounding that so many people of such a high intelligence can’t comprehend Turing’s rather logical plan. While not an expert on Turing’s life, it seems that this is a cliche and lacking source of drama, probably because it wasn’t one in reality.

Turing’s homosexuality would seem like the obvious choice for Oscar-worthy drama, but despite the epilogic captions emphasizing its greater historical context, it is ultimately a sub-plot. While Turing’s social ineptness and homosexuality may be the emotional heart of the film, the key scenes and major turning points all hinge on his machine. Turing himself acts as a machine, but with the aid of Joan Clarke as the one true friend he gains, Turing comes out of his emotional shell as the film goes on. It’s certainly interesting to see emotions bubble up inside someone incapable of handling them due to a lack of exposure, but it never quite emotionally resonates. Towards the end of the film when Turing’s outed and subjected to hormonal treatment, it becomes painfully clear that the emotional connection the film thought it was building up, isn’t there. Perhaps it’s the film’s emphasis on narrative and melodrama in the first two-thirds that result in its genuine efforts feeling empty. When you attach a film’s core to a machine and not a person, you’re leaving out factors in the equation, bits in the cypher, and creating a flawed and hollow result.

While smooth and comfortable to watch, easy and entertaining to digest, The Imitation Game is nothing more then a well-oiled machine. A machine pumping out a calculated and predictable result. One that imitates the genuine films that came before it, but without the key that will crack the code of greatness. If the film’s thesis of “Sometimes it is the people who no one imagines anything of who do the things that no one can imagine,” then it is also evident that those we can easily imagine something of can do the things we easily can imagine.