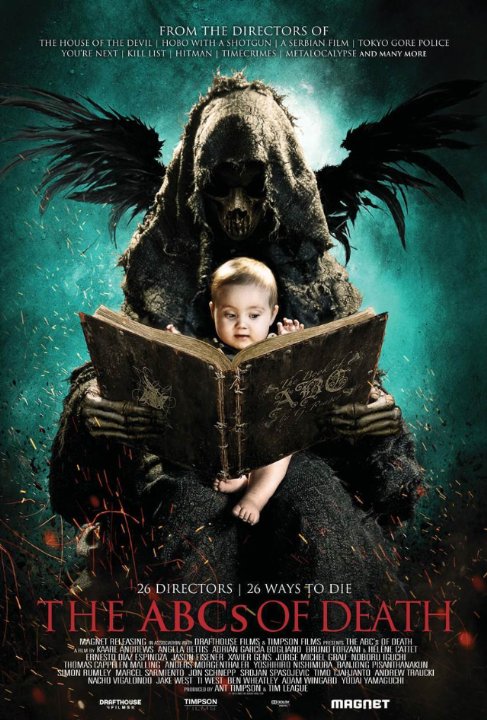 I have a feeling this review will be short, since with the 26 part anthology ABCs of Death, inconsistency kills a good chunk of analysis without looking at each individual part. Let me make this simple then. Don’t watch this movie. This shouldn’t have been a movie. This should have been a youtube channel of 26 different videos so you could watch just the good ones and not have to sit through the 25 others.

The biggest problem with ABCs is that the time for each vignette is too short. It takes a certain skill to cram a quality story into a couple minutes and a lot of the times it’s just hit or miss. This leads to rushed exposition, nonsensical plot twists, and overall confusion. However, for every one I want to see more time given to, there is a short I don’t want to see extended because of how batshit insane or stupid they are. A lot of the shorts are so incredibly stylized and zany in their “story” that it takes a very specific taste to like it. With a lot of these, a twist is needed at the end because typical climax isn’t exactly an option. This stems back all the way to the EC horror comics. However, most of these twists are FUCKING STUPID. The lack of world building aside, some of them are just terrible ideas.

The technicals are meh most of the time. The camerawork is typically fine, but the effects are rather lacking and the CGI has that overachieving indy filmmaker look to it. Not really much to say on that front. But here’s a fun drinking game for you and your of age friends. Take a drink every time you guess the word the letter stands for at the end of the short correctly. Man, by the end of the movie you’ll be FUCKING SOBER. The title cards make no goddamn sense most of the time and there are even times that some sketches would have been better off under other letters.

A is for Asinine, B is for Bullshit and C is for Completely mediocre. Those are the 3 categories each of the 26 shorts falls under. They’re rarely effective as horror (X), uncommonly effective as comedy (N, Q), and barely ever plain interesting to watch (S, U). These few shorts are not worth the rest of the hour and a half to get through and even if you’re the biggest horror fan ever, the tone is so inconsistent that you’re guaranteed to be unentertained 50% of the time. If you want to learn how to do and not do short films, then by all means start taking notes, but other then that ABCs of Death is another waste of time in the flood of horror anthology films coming out.